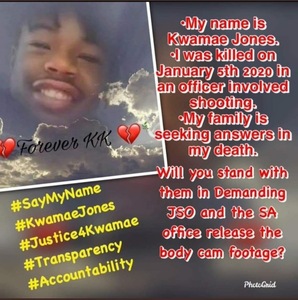 Release the body cam footage for the January 5th 2020 killing of Kwamae “KK” Jones by Jacksonville Sheriff’s Office. Release an Autopsy report to Kwamae’s family and their attorney. Provide transparency and accountability for this shooting and all other incidents of JSO brutality and lethal use of force. Give Kwamae’s mother the answers she deserves about the death of her 17 year old son at the hands of police.

JSO refused to notify Kwamae’s mother of his death. They lied on multiple occasions about the age of the victims of the shooting, stating initially that it was two 22 year old males. It was almost 2 weeks before his mother was able to see his body. JSO has a pattern of murdering young black males and not being held accountable.