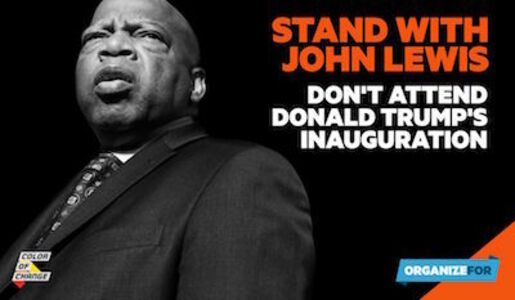 For the first time in 30 years, Lewis plans to boycott a presidential inauguration, adding he "cannot be at home with something that [he feels] is wrong." While some will argue attending this inauguration ceremony is tradition, we the people of Kansas, ask that join Lewis and other Congress members in boycotting this celebration of tyranny and racialized violence.

Now we’re asking you to join your peers. Like us, they agree that Trump’s campaign to seize the White House relied on repeatedly insulting and villainizing Black, Muslim and Latino communities. This is not the kind of leadership we welcome in Kansas or in this country, so it should be no surprise that we are asking you, a representative of our beloved Kansas, not to attend Trump’s swearing in. Senators Pat Roberts and Jerry Moran, we need you to send a clear message to Donald Trump: I do not support your tyranny.

Trump’s hate cannot be contained. But we can firmly and strategically oppose it whenever and wherever it appears. When anti-Black, anti-Muslim, anti-immigrant, or anti-woman forces show up in democratic institutions, voters and community members need to know that you will stand up to hate and bigotry. Boycotting Trump’s inauguration is a strong step toward earning the trust of the people of Kansas. As sitting officials, your decision to skip Trump’s inauguration sends a critical message: We, Senators Pat Roberts and Jerry Moran, will not celebrate the destruction of the values and institutions the American people hold dear. We are asking that you stand in with Kansas. We, the undersigned, respectfully ask that you do not attend the 58th U.S. Presidential Inauguration.