TELL THE U.S. DEPARTMENT OF EDUCATION TO STOP FUNDING THE KINDERGARTEN TO PRISON PIPELINE 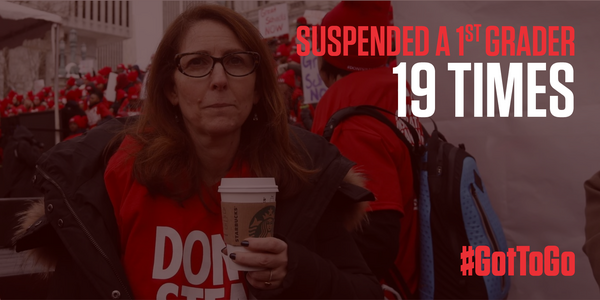 Black students are four times more likely to be suspended than their white peers. The U.S. Department of Education has rightly called on public schools to end racially disparate practices of suspensions that lead to the school to prison pipeline. Federally funded charter schools should be held to the same standards. One of the most prominent charter school networks in the county is Eva Moskowitz’s Success Academy in New York City and they have received $37 million in federal funds since 2010 including $13.4 million this year.

On October 29th, a very disturbing expose in The New York Times revealed Success Academy kept a "Got to Go" list of students to push out of school. Many of these students were routinely suspended until their parents withdrew them. This report followed the release of new data showing that Success Academy suspends elementary school students at seven times the rate of New York City's public elementary schools including many children in kindergarten. The U.S. government must stop funding the school to prison pipeline.

We are calling on you to take immediate action by:

 Conducting a civil rights investigation into Success Academy suspensions of Black and Latino students and students with disabilities and withholding any payments of federal funds until the completion of that investigation.

We have a crisis across the country with school arrests and suspensions. We all were horrified to see a South Carolina police officer assault and handcuff a 16 year black student in her classroom. But the school-to-prison pipeline starts the disparate treatment of our youngest black students in school. Black children make up 18% of preschoolers, but 48% of pre-school suspensions. Overall black students are 4 times more likely than their white peers to be suspended. Latino, LGBT and special needs students are also more likely to be suspended. The data is clear suspensions lead to dropouts, which often lead to prison.

My 10-year-old son Jamir has faced multiple school suspensions when he was a student at Success Academy charter schools in New York City. He was routinely asked to be picked up or was suspended for minor infractions like being too emotional or not going up the school stairs in a timely manner. My son has special needs and he can act out when not provided the proper supports, but Success Academy did nothing to help him. I finally had to withdraw my son.

Jamir and I are not alone. On October 29th, the New York Times reported on a Success Academy “Got to Go” list of students the school wanted to get rid of. These students faced numerous suspensions as early as kindergarten and most of the parents withdrew their children as a result. Moskowitz has boasted on national TV and in a prominent opinion piece in the Wall Street Journal about her harsh discipline policies including her suspension of kindergarteners. Last year one of her schools issued 44 out-of-school suspensions to just 203 kindergarteners and first graders.