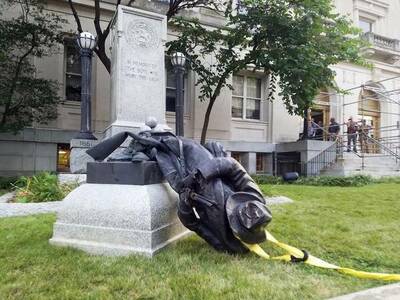 Update: October 7th, 2017
CHARLOTTESVILLE, Virginia—
“You will not replace us”
“Russia is our friend”
“the South will rise again.”

“They were shouting ‘You will not replace us,’ ‘Russia is our friend,’ ‘the South will rise again,’ ‘we'll be back,’” said a University of Virginia faculty member, who wished not to be named for fear of retribution.
Via @thedailybeast

On Saturday, August 12th, white supremacist, terrorists marched through Charlottesville, communities and the University of Virginia campus, rallying around a statue of the Confederacy and carrying torches evoking a history of violent racial terrorism. The next day in Charlottesville they murdered someone in the name of their white supremacist symbols. Protesters were rammed by a car killing someone in a terrorist attack. These symbols were not chosen randomly. Confederate monuments have been erected and remain as a direct rebuke to the recognition of the full humanity of Black people. Confederate monuments were built and given places of honor in public space as gains in this recognition have been made and it is the commitment to the reversal of this recognition of humanity that draws white nationalists to these symbols.

These symbols of white supremacy have always been memorials to the cause of slavery and the denial of humanity to Black people. Now they are being weaponized to rally white supremacists. We have the power to diffuse these modern-day lynch mobs by removing these statues altogether, instead of giving white supremacists a rally point.

Confederate statues and named institutions are more than mere symbols of a heritage but instead, they are an assertion of the continued imposition of white supremacy and its current political power. Terrorists in Charlottesville understood this and were willing to kill in the name of this, we must be determined to persist in the face of this white supremacist terror.

Removing all Confederate statues would be one step among many in sending the message that we are no longer honoring white supremacy at a societal level. We've already many communities take the step to address these monuments in cities like Tampa and New Orleans. Join with me today and pledge to work to remove all Confederate statues or names from our community.
- [ ]