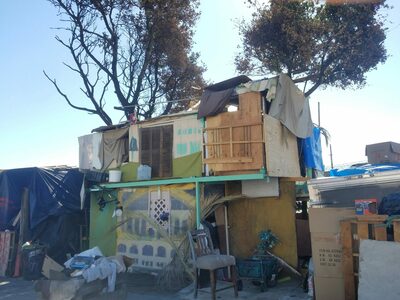 Can you name the city where this house is located?

The eviction ban needs to be repealed immediately because it has no end date, it’s being misused and it forces the redistribution of property. The Oakland City Council and 3 members on the Alameda County Board of Supervisors have not addressed this issue which is having a devastating impact on small mom and pop rental housing providers.
The City of Oakland and Alameda County are among only a handful of cities and counties in the entire nation that still have an eviction ban. They have been neglectful in dealing with this situation. The city council accepted a 6.3% raise this year bringing their salaries to over $100.000.00 a year, but they have banned the income of some rental housing providers for over 2 ½ year. This is unethical.
Thief is a crime punishable by law in every industry except housing. When the city and county weaponized tenants against rental housing providers, tenants started exploiting the system and refuse to pay rent because they can’t be evicted. Some tenants were not affected by covid-19 and worked through the pandemic. Some didn’t apply or was not qualified for rental relief. These tenants need to be evicted immediately. Some mom and pop rental housing providers are now thousands of dollars or more in the hole. The City and County is still charging property taxes, penalties and business license fees, but Rental Housing Providers can’t do business because of the ban. The tenants who are not paying rent still receive the services that the rental housing providers’ taxes pay for. There are lots of taxes. Where’s the representation? Mortgages and insurance still have to be paid. Some rental housing providers are paying utility costs for their units. There has been inhumane behavior by some tenants who have destroyed their unit and forced owners to sale or pay astronomical repair costs. Rental Housing Providers will have to pay attorney fees to settle these issues in court. This injustice needs to stop. The financial responsibility for Covid-19 should be on the local government.
While the council members collect their big checks and allow tenants to extort money from small mom and pop rental housing providers, the homeless are still out in the streets. The independent Institute reports, “The bright side of the bay, as Oakland is known, has followed the same failed game plan as most other cities. And that’s why the homeless crisis persists.” There is a model city in the U. S. with a proven track record of success that can be adopted. The Independent Institute also said, “Meanwhile, instead of dealing with the problem logically and methodically, Oakland has reacted with a series of emergency measures that have only exacerbated the problem.” Chaos and confusion often accompany emergencies and crises. This is when the most vulnerable are preyed upon. Small mom and pop rental housing providers have been devastated by the unprincipled and abusive actions in Oakland. They are being used as scapegoats.
The State of California mandated cities, towns and counties to oversee the building and maintaining of housing units to accommodate all income levels. The Regional Housing Needs Allocation report shows that the City of Oakland and Alameda County have not met the number required to house their residents. This is one of the reasons why the rent is so high. Every industry operates by supply and demand. America is supposed to be a free enterprise system where everyone has the right to make a living. That right is being denied to some rental housing providers. We need equitable representation in the City of Oakland and Alameda County.
Crime is on the rise. 1 in 15 people will be the victim of a crime in Oakland. There’s a housing crises, a homeless crises, a health emergency, schools are closing and there’s a $50,000,000.00 plus budget deficit. If Oakland is to rebound, we need elected officials who don’t condone “people behaving badly”. We need elected officials who are responsive to the community as a whole (businesses including rental housing providers, homeowners, tenants and visitors) not just their constituents. We need elected officials who are accountable, transparent and responsive. We need elected officials who can work together to fix the problems and not use conquer and divide tactics, pitting tenants against rental housing providers. This affects the spirit of the community, keeps people hostile and constantly fighting for less than what they deserve. We need elected officials who can do the right thing.

Oakland and San Francisco California are the most gentrified cities in the entire nation. The Black population in both cities has been reduced over the years by more than 50%. The best way for Black people to have a place to live is to become homeowners. Black homeownership is in crisis. Black people have not recovered (unlike other racial groups) from the 2008 housing crisis when they were targeted by the banks with subprime loans. Black homeownership has continued to decline since then. Discrimination in buying, selling, renting, redlining and bad appraisals have all been devastating hurdles. Real estate is the primary means of passing along generational wealth. It is crucial that Black people have the opportunity to leave a legacy. Gentrifying Black rental housing providers will reduce the number of Black tenants in Oakland. No one should lose their property because they have been starved of resources to stay afloat. The focus should be on helping small mom and pop rental housing providers, home owners and tenants.
The house above is located in Oakland, Ca.