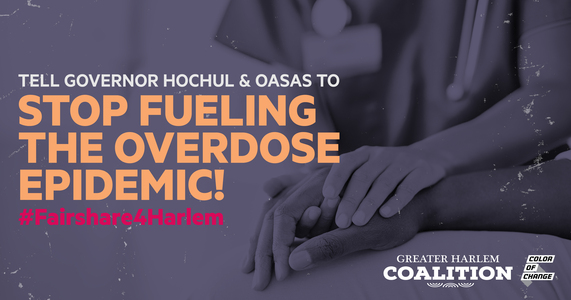 We are asking Governor Hochul and Commissioner Cunningham to commit to reducing the disproportionate density of drug programs in communities of color like Harlem. We believe that a fair-share distribution of small-scale, effective, and holistic OASAS-licensed programs in all New York neighborhoods will lead to more effective outcomes and reduce overdose deaths. By leveraging the OASAS relicensing process and new Opioid Settlement funds, Governor Hochul and Commissioner Cunningham have the power to rebalance OASAS programs on a geographic and racial fair-share basis.

Currently, the imbalance in Harlem is such that 75% of the opioid treatment patients that OASAS sends to programs located in Harlem and East Harlem do not live in our community - traveling from as far away as Staten Island. While our community only accounts for 8% of all opioid treatment patients, OASAS sends 20% of all patients to Harlem every day. We are advocating for OASAS to decentralize the concentration of opioid centers in Harlem and commit to a data-driven and equitable approach that increases access to community-based programs that are small-scale, effective, and holistic.

We ask OASAS to join us in fighting this imbalance for three reasons. First, we know that when programs are more conveniently located in all neighborhoods, drug treatment success increases with positive outcomes. Second, we know that the current presence of treatment mega-centers in communities of color reinforces the message that addiction is a Black issue and one that should be contained in Black neighborhoods. Third, concentrating the majority of the city’s programs in Harlem fuels the overdose epidemic. New Yorkers shouldn’t have to go out of their way to access vital care. Equitably distributing the locations of treatment centers throughout NY will not only work towards racial justice, it will also lead to better health outcomes for all.